«Three» was composed by Anna Stereopoulou in summer 2001. The present audio recording is the original one that took place in March 2002 at Trinity College of Music, during ‘The John Halford Composition Prize competition’ [Peacock Room, T.C.M., Greenwich, London, UK]. A new version of «Three» was included in the composer’s ‘electron‘ project, presented in MCF [Athens, Greece / 2011], as well as in the same-titled album, released on November 23rd, 2017 [https://annastereoscopic.wordpress.com/2017/11/23/electron-2017-anna-stereopoulou/].
Both versions are unreleased. The present, original recording was released in July 23rd, 2016 and included in the new «Against the Silence · V» compilation [digital double album], after an invitation of the platform’s members to the composer.

«There are no many words that can succeed in describing my feelings about the specific composition. There are, though, some quite special memories; memories of its birth, its recording, its performances, and now, during its remastering.
There is probably no such thing as a ‘special Moment’ to Wait for its release… there is, though, a ‘special Moment’ to Make -ourselves- and let ‘things’ be Released in Light…
My thanks to the ones who have loved ‘Three‘ and to all performers of its original recording.
The release of «Three» (July 2016) is dedicated to the memory of our friend, student-mate and wonderful musician, Jon Hassall.» 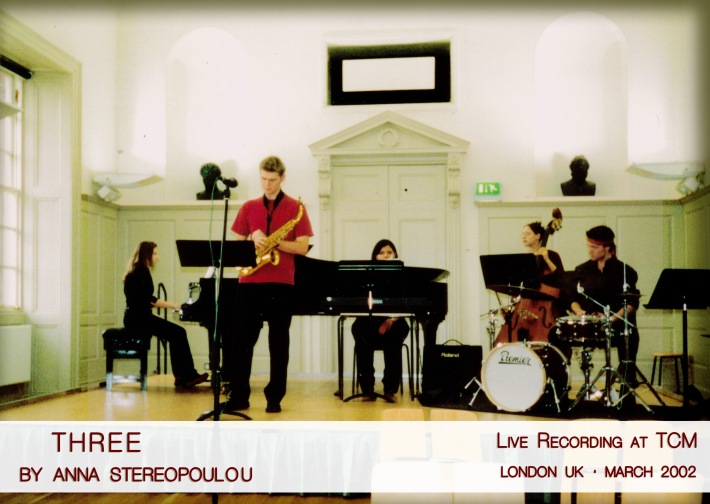