«Sound is Ariadne’s helping thread;
it is the map of (Mother) Nature, revealing the structure and function of our society.»

«SYN» is based on the Heraclitian ‘Unity of the Opposite‘ genres, presentation forms and Art & Science subjects, and forms a Worship for Nature and a wider and more universal ‘soma’ of the Whole.
Anna Stereopoulou, will present compositions and improvisations, with feelings weaving between atmospheric and upbeat elements, creating a kind of Musical-Synaesthetic Enkoimesis + Awakening.
«SYN» is a living Soundtrack of our Times, a fractal organism constantly changing, or else, an on-going sound-and-music composition by Anna Stereopoulou consisting of different gears, and during which the Total Sound Sum of each Moment never sounds the same. Its aim is to challenge the spectator to experience a Tranquil but Lucid state.

SYN is a Sea of (Sound) Waves; sometimes calm, sometimes wild.
SYN is our Soul; Sometimes confused, sometimes in-tune…
…with our Universe, within and around us ~ 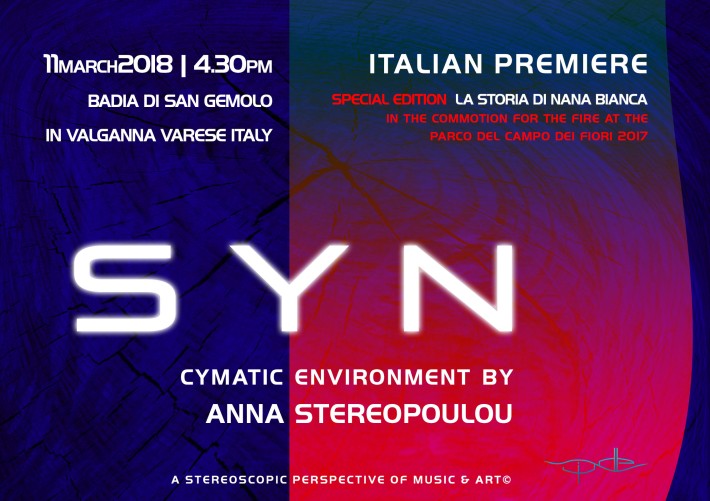 «S Y N» by Anna Stereopoulou is characterised by the artist as a «Cymatic Environment»© and combines elements of Live Concert /Live Synthesis – Sound Installation – Lecture.

SPECIAL ITALIAN EDITION
The specific art presentation of Athens-based composer Anna Stereopoulou is part of her concert series, titled «SYN» [World Premiere: «Teaching Hall» of the Music Library at Megaron – The Athens Concert Hall, Greece, May 30th, 2017 / Berlin and Germany Premiere, January 28th, 2018], as recently developed and designed especially for and as a response to the invitation of ‘La Badia di San Gemolo‘ in Valganna (Varese, Italy), in the commotion for the Fire at the Parco del Campo dei Fiori 2017.
Including parts of the composer’s latest album, titled ‘electron‘, «La Storia di Nana Bianca» (The Story of the White Dwarf] will take off for first time and make us travel further than we can see, hear or imagine.