A presentation of visual artist Agness Buya Yombwe and her artistic contribution to
The Women of the Great River call-out of Radio Continental Drift, guest project of CIRCE The Black Cut. 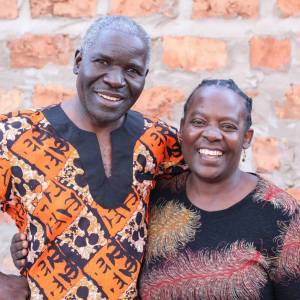 As mentioned in the first Call 2015 of c i r c e :the black cut: project, this year we have the honour to host Radio Continental Drift, “founded in 2005 by sound and radio artist Claudia Wegener, as a ‘broad casting house in the bag of a listener’, an online amplifier of unheard voices and a training vehicle, which could dock-on to organisations or communities wherever its bag of tools and skills is needed.” As we continue reading in RCD’s official blog “radio continental drift celebrates the art of listening and the power of storytelling in local recordings, especially on the African continent. The ‘dramatic’ field-recordings are presented in playlists on the Internet Archive and shared under creative commons license with the invitation to global listeners to explore and use the archived audio.”

And that’s how I got to meet Claudia and her visionary project, when in January 2015 I was informed about her Open Call to make a remix on one or more tracks of The Women Sing at Both Sides of the Zambezi playlist. The track I used included an excerpt of writer, Virginia Phiri‘s (Harare, Zimbabwe) audio-recorded interview. The experience of working on the specific track and the close ‘relationship’ I developed -within only two days- with the sound of the African Drum and Virginia’s words and timbre of voice has been one of the most important in my music-life. A real milestone it was, that I didn’t restrain myself at all from keeping in touch with Claudia Wegener even after I submitted my remix. And within a short time of period a wonderful friendship started which made me think of inviting Radio Continental Drift on board c i r c e :the black cut:.

And this is the story which has made the CIRCE Family grow wider and bring so many remarkable female artists and interesting storytellers from Zambia and Zimbabwe, amongst its members.

More specifically, the new playlist made and offered by Claudia this time is titled The Women from the Great River [https://archive.org/details/THE_WOMEN_OF_THE_GREAT_RIVER_687] and it is offered as a Call-Out to both Listening and Visual artists around the world. One of the artists who responded to the call is visual artist Agness Buya Yombwe, who contributed these two paintings -shown below- to the above mentioned Call-Out. 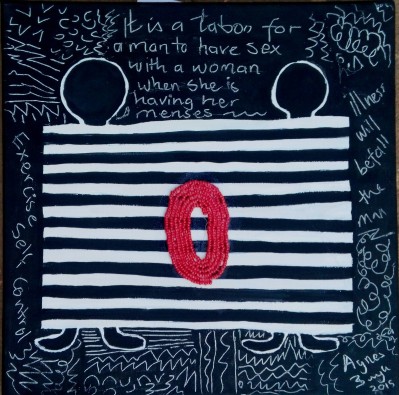 ‘Red Beads On The Bed’ painting by Agness Buya Yombwe [2015]

«A Visual Artist, Designer and Art Teacher from Lusaka, Agness founded and runs Wayi Wayi Art Studio & Gallery with her husband, painter Lawrence Yombwe, in Livingstone, Zambia.
Agness’s paintings are a visual remix to Clip 51 in the playlist, a recording in which Luyando and her aunt Janet talk about female initiation rites among the Tonga people in front of related artifacts at the BaTonga Museum in Binga. Here, Janet relates the women’s custom of placing red beads (which she is usually wearing) on the bed, indicating to her husband that she is in her menstrual cycle.
• http://aporee.org/maps/work/?loc=18737
• http://ia801702.us.archive.org/34/items/Voices_from_Binga_949/01_Janets_song.mp3
…from: http://archive.org/details/Voices_from_Binga_949

Both source recordings, the interviews with Agness and with Janet and Luyando, are from November 2012. When I visited Agness at Wayi Wayi Gallery in mid-November, I played a couple of clips from Binga to her, and Janet’s story of the women placing red bead on the bed particularly captured her imagination. As you can hear in Clip 54, it was there and then that Agness “promised” making a painting about what she had heard from Janet.
I played the Binga recordings to Agness, knowing her interest and research about indigenous cultures, the “Mbusa” (female initiation rites) among the Bemba people in particular.
These images and their stories are carrying deep knowledge of culture and how it flows as communication and inspiration among us all, ever transforming and transformative, an umbilical cord we keep weaving together, since generations before us to the ones coming after us…

The story was earlier documented in an article co-authored with Felicity Ford for her blog “The Domestic Soundscape”; published in September 2013: http://thedomesticsoundscape.com/wordpress/?p=5422
If you wish to know more about Agness’ work and its relation to the Mbusa, please read this resourceful article by Deborah A. Hoover: “Revealing the Mbusa as Art. Women Artists in Zambia”; in African Arts, Vol. 33, No. 3 (Autumn 2000)»